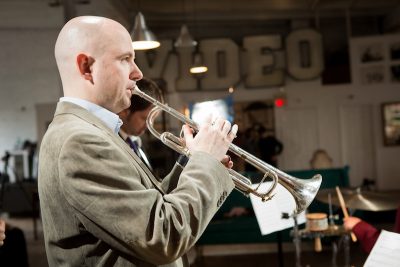 Thierry Champs leads a double career, both as a professional trumpet player and pedagogue. As a trained trumpet player, Thierry Champs holds a special place on the Montreal music scene. The precision and flexibility of his playing, his assured technique and artistic sensitivity have led him to play with the best in the profession.

A passionate of pedagogy, Thierry teaches several master classes in Quebec, France and Mexico. His approach allows his students to acquire techniques whose goal is to optimize their instrumental performance.

Career as a teacher »

I first met Thierry when he came to the Conservatoire de musique de Val-d'Or to give a master class with his quintet, Magnitude 6. His approach, which emphasizes relaxation and a deep understanding of the human body, was a surprise for many! When I moved to Montreal to pursue my education at the university level, I kept on consulting with Thierry whenever I encountered a problem.  Each time, I came out of his course with a new approach and a solution to my problem and, up to this day, they are still working. Now that I have completed my Master’s degree, I will certainly keep on working with Thierry, since a mere conversation with him is always immensely rewarding!

I have known Thierry for 13 years now and I am constantly impressed by his professionalism.  He is an excellent and competent trumpeter and, as a pedagogue, completely devoted to his students.  It’s always a pleasure for me to engage in events along with Thierry Champs.

A virtuoso trumpet player, Thierry Champs "shines" equally as orchestral musician, soloist or chamber musician. He often worked under my direction and I have always been impressed by his degree of preparation, his diligence and professional attitude.

Thierry Champs is an exceptional talent.  Not only does he possess an excellent control over his instrument, but his assured sound and solid technique are constantly there to serve his great musicality. He is often invited to play with the most important ensembles in Montreal.  His spontaneous and generous personality; his excellent attitude in all circumstances make him a much sought after colleague.  Our institution is not only a pleased, but honored to have among us someone with such a strong work ethic.

Thierry Champs is a studious and open-minded trumpet player, and without rejecting ideas from the past, he is from another generation.

An indefatigable worker and a true professor, he is constantly seeking new teaching ideas to ensure the comfort of his pupils, since he’s quite familiar himself with the hardship of the: “Blow and we’ll see after!”

His teaching method, based on "taking the mouthpiece by the horns", relies more on intelligence than it does on brute force, so much the better for our lips and morale.

Without ever passing judgment, he teaches how to breathe properly, how to work with relaxation but seriousness and, above all, to discover the Pichaureau method, the key element of a vast body of knowledge.

For all that, he should be thanked and I recommend young emerging trumpeters not to turn away from Thierry Champs’ teachings.  The very survival of your lips depends on it, without mentioning that you will also gain in wisdom and musicality!

In a single class, Thierry’s pedagogical approach led me to understand several mechanical aspects of the human body. Now, I can “feel” what’s happening in my body while I play the trumpet and if something is wrong, I can now quickly understand what it is and to correct it when needed. It is an extremely efficient method if you let yourself be guided without trying to do “too much”.  Every day, I apply this new approach to my instrument and I have become unable to dissociate his pedagogy from mine.

For a number of years now, I have had the opportunity to play along Thierry Champs.  I can say that he is a most refined artist and an exceptional pedagogue.

Thierry Champs has been one of the most important actors in my musical training. His approach to the instrument can be summarized in one word: natural. His challenge is to impart to his students, who might have taken bad habits over the years, a method of playing which transcends technical difficulties through relaxation and elimination of contrivances harmful to good progress.

I was a mere beginner when I first met Thierry (I was still in High School). On a regular basis, he came and completed our section of the youth orchestra I was playing with, and those meetings were always enlightening. Throughout the years, our roads frequently crossed and led us to often play together; just sitting beside him teaches me a lot.

A class or a simple conversation with Thierry Champs might not be a miracle cure (providing that there is a cure) for intonation or response problems or against those unavoidable cracked notes but, if you have an open mind, it will give you a completely fresh vision of your instrument.  My experience, as a student, is unquestionable and I certainly intend to pursue it.  My training might be advanced, but it is far from over.

In 2006, after years of playing the classical guitar, I was a newcomer to the world of trumpet playing.  That’s when the amateur musician that I was had the good fortune of crossing paths with Thierry.  That was to be quite a revelation!

"Blow harder!", "Press your lips together!", "Press the mouthpiece harder against your lips", "The trumpet is not easy!", "To hit the high notes, you have to build up your lip muscles": those are comments I often heard.  As I was unable to practice several hours every day, I thought at the time that I would never reach a level allowing me to play the full register of the instrument; but that was before I met Thierry.

His teaching method brings down preconceived notions about how one should play the trumpet. With a method, similar in many ways to the teachings of Claude Gordon (probably better known in North America than Robert Pichaureau), Thierry taught me how to avoid fighting my instrument and how to play along with it, to forget technical details and concentrate on what is essential : the production of sound and breathing. His teachings also allowed me to become a better guitarist (more relaxed, since I don’t play in apnea anymore…). In short, and thanks to Thierry, it is with great pleasure and much satisfaction that I now play the trumpet.

I took summer classes with Thierry to improve myself because I was going to music concentration this year. It helped me a lot! Now I play better and clearer than last year. Thierry is a very good trumpet teacher, he knows what he wants and he explains us very well!

Like any other instrument, the trumpet has its own difficulties and subtleties.  As an amateur trumpet player, I picked up the instrument late, and just for fun. Before I met Thierry, I was mistaken in thinking that I could learn by myself.   With the help of his technical approach and clear and simple explanations, I finally managed to get around my fear of the instrument and get to the point where I could enjoy singing along with it. Not only is he a competent and attentive teacher, but his patience helps relieve the stress often associated to performance.